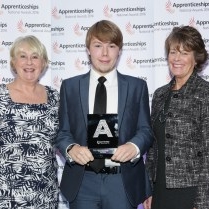 I came to South West Water as an apprentice after deciding I didn't really want to go to university. I did maths, physics and computer programming in college and was accepted into the University of West England to do computer programming and software development. I joined South West Water as part of the financial development programme, where we rotated between various departments in Finance. One of these departments was Central Finance, the tasks included creating journals for our general accounts, dealing with VAT returns and working with our subsidiary business, Pen Leasing.

The following video was created in my first few months with South West Water where I was part of the 2014 apprenticeship intake. A series of short videos were produced to support the company's Apprenticeship programme which has received national recognition by becoming a Top 100 Apprenticeship Employer.

From these early days I have since achieved my AAT Level 2 and 3 qualifications with a 100% pass rate while also developing at work. I have also been awarded the Highly Commended Advanced Apprentice of the Year at the South West Regional finals of the National Apprenticeship Awards.

After putting in lots of hard work, I have been able to progress from apprentice to a full time employee as a Capital Assistant Accountant and I will now be mentoring the latest group of apprentices at South West Water.

I have really enjoyed my apprenticeship and now look forward to developing my career further with South West Water.