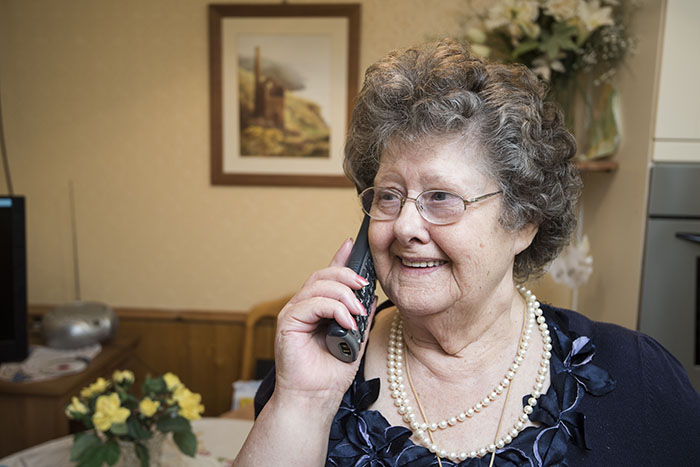 Truro-based charity, iSight Cornwall has been awarded funding to help tackle the loneliness epidemic amongst those in the county who are blind or visually impaired. Our Neighbourhood Fund contribution will be put towards the charity’s growing My Friend and Living Needs services.

I-Sight Cornwall is Cornwall’s oldest charity, they have a small team of 12 who have been inundated with requests for help due to the overwhelming sense of isolation from those who are blind or visually impaired. Subsequently, they are hugely reliant on over 220 volunteers to provide products and services due to an above average amount of people in the county with these disabilities. Cornwall’s older population as well as the combination of increased life expectancy in the county means their important work helps over 4,000 people a year who have been disproportionately affected by the pandemic and is a worthwhile use of South West Water’s financial support.

iSight Cornwall has provided ongoing care since 1856 but has felt the biggest hit in the pandemic as there has been elderly citizens who have been left alone without carers or family and the support of iSight has become their lifeline. This includes the organisation’s commitment to running 14 activity centres or providing face-to-face contact where needed since September. This work is vital as nearly two-thirds of disabled people have experienced chronic loneliness during lockdown.

The charity’s virtual befriending has been needed by all age groups in a bid to combat the worrying trend of loneliness during the pandemic. The overwhelming support of volunteers has meant often they have been able to match volunteers and the recipients based on hobbies and interests for everyone to get the most out of the service. The My Friend scheme has provided genuine and valuable connections during extended periods of isolation.

The extent of our role in keeping this valuable service going is tangible and worthwhile due to the financial hardship faced by the charity. This includes self-funding PPE and use of the flexi-furlough scheme, meaning they have been more reliant than ever on their volunteers, the admin of which will be paid for by this significant donation.

As a South West Water customer, Carole Theobald of ISight Cornwall spotted the scheme in her newsletter and has said about the financial donation:

“South West Water’s Neighbourhood Fund is simply fantastic and it is commendable by such a large organisation. They are playing a vital role in local communities and I thought the structure of the application process was very good. We can’t imagine fundraising will happen for a while, so this very much came at the right time. This money will be used to aid over 200 volunteers, thank you!”.

“We are thrilled to help such a fundamental organisation in Cornwall. They are a pillar to the county’s community and provide an invaluable service. The My Friend and Living Needs programmes are great initiatives which South West Water is proud to be aiding.”

This funding comes as part of South West Water’s assigned fund of £100,000 to support community groups and initiatives which will improve the lives of residents in Devon, Cornwall and Dorset by inspiring physical activities, enhancing education, health and wellbeing and deliver positive environmental outcomes.

The local community groups which are currently greatly benefitting from the Neighbourhood Fund have been struck by the effects of the pandemic due to a limited supply of cash and the inability to receive funds through typical methods of fundraising.