Preparatory work is under way for £5 million investment in Torbay 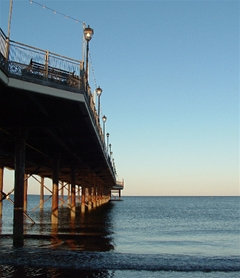 Preparatory work has started ahead of delivering £5 million worth of projects to further improve bathing water quality at Torbay's beaches.

Engineers working for South West Water will be carrying out surveys to map ground levels and underground utility apparatus, and sinking boreholes to establish ground conditions.

The results of the surveys will help South West Water design projects to ensure Torbay's beaches reach the more stringent standards of the European Union's revised Bathing Water Directive, which comes into force in 2015.

Programme manager Ian Lake explained: "Last year, South West Water announced it would be spending up to £20 million on a number of projects to further improve bathing water quality at key beaches including Torbay, where we will be investing around £5 million.

"Our proposals for Torbay are in the early stages of development, and this survey work is all about gathering data so we can develop detailed plans.

"At the moment we are looking at a number of possible engineering solutions in different locations, which might include increasing storm water storage capacity in the sewerage network and improving combined sewer overflows. The extra capacity and the other improvements will mean fewer discharges from our network during extremely wet weather."

Surveyors will be working in and around Cockington Lane, Abbey Park, Carey Parade and Old Mill Lane in Torquay and Littlegate Road in Paignton for the next six weeks.

Ian added: "It will take some time to analyse all the data and come up with final proposals but we will be working closely with Torbay Council to ensure that any future work we do has the least possible impact on the local community, while ensuring that the people of Torbay continue to enjoy the benefits of top-quality bathing water for many years to come."

Cllr Ray Hill, Torbay Council's Executive Lead for Highways, Transport and Environment, said: "These planned works are great news for Torbay. We have been working closely with South West Water and the Environment Agency for a number of years and have achieved a great deal during that time, with many improvements made to the quality of the bathing waters of Torbay.

"This project will help Torbay to respond to the higher standards required by the revised Bathing Water Directive.  The quality of Torbay's award-winning beaches and super water quality are essential for the benefit and enjoyment of our residents and to attract visitors to the bay.

"With more people staying in the UK for their holidays it is also important that Torbay is able to compete with other resorts for valuable tourism income."