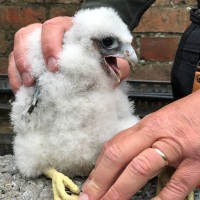 Rare and protected peregrine falcons have set up home for the first time in Bournemouth Water's New Milton Water Tower.

Keith Betton, Chairman of the Hampshire Ornithological Society and Official Bird Recorder for Hampshire, first noticed a pair of peregrines on the tower last September.

Keith said: "Peregrines used to nest only on mountains and cliffs, but about 25 years ago a few started to nest on tall buildings - and now that is what most of them do in southern England. They are living alongside us and doing well. It is a terrific success story and it is great to have them in New Milton."

Keith and Joanna Hayward from New Milton Council contacted Bournemouth Water to see what could be done to assist the protected birds and encourage them to nest on the 30-metre high octagonal tower.

Saska McGrath, National Environmental Programme and Climate Change Manager from Bournemouth Water, said: "I talked to Keith and Joanna so that we could work out the best place to install a nesting box on the tower and encourage the peregrines to breed."

The water tower is still operational and it was decided to place a box in the turret to encourage the birds to nest in an undisturbed part of the tower. A nesting box was provided by Falconry Solutions and installed by Bournemouth Water in February. A web cam was then put on the tower so that the birds could be observed as their breeding season progressed. To the delight of all involved the peregrines started using the box from 1 April and incubation of the eggs started on 5 April. A chick was first observed on 9 May, and a further two were spotted the following day. Since then the parents have been working hard to protect and feed their hungry brood.

The chicks have been ringed so they can be identified, and to check if they return to New Milton Water Tower once they fledge.