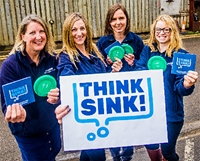 South West Water is launching a new campaign encouraging customers to dispose of cooking fat, oil and grease in the kitchen bin.

Every year, tens of thousands of litres of waste fat, cooking oil and grease are poured down sinks by people who don't realise the problems this could cause.

And with a medium sized turkey producing three-quarters of a pint of fat, the volume of cooking fat entering the region's sewers over the festive season increases dramatically.

South West Water's Head of Communications Alan Hyde explained: "When hot fat, oil and grease cools it forms a solid mass which can build up inside your pipes.

"At best you might notice that your sink or dishwasher isn't draining as quickly, but blocked pipes can also cause flooding. This is extremely unpleasant, especially if it happens in your home. It can easily be avoided by disposing of fat, oil and grease in the kitchen bin. Looking after your sink can also save you the cost of calling out a plumber to clear a blockage."

1. Scrape food scraps and fat off your plates into your bin or food waste recycling

2. Use a container to collect cooled fats, oils and grease from roasting trays and frying pans

3. Give plates and pans a quick wipe with kitchen roll to remove any liquid fat or grease before putting in the sink or dishwasher

4. When full, empty or dispose of the container into your kitchen bin

Over the next three months, dedicated advisers will be talking to customers and spreading the Think Sink! message in towns and cities including Exeter, Cullompton, Truro and Falmouth.

The Think Sink! campaign is supported by the Environment Agency. Alan Burrows, Area Manager for Devon Cornwall and Isles of Scilly said "I've witnessed first-hand how fats, oils and grease can block pipes and impact on our environment. Let's work together to support this campaign and Think Sink."

To find out more, see www.southwestwater.co.uk/thinksink